Bridges such as the Pont des Arts, the famous Love Lock Bridge in Paris, complement the views of the river and the city at night.

No visit to Paris is complete without taking a stroll along one of its many bridges. Here is a list of some of our favorite bridges in Paris.

Check out this recommendation and other great things to do while you are in Paris.

The History of Paris’ Bridges

The city of Paris did not always have bridges crossing the Seine River. It wasn’t until 864 A.D. that the passing of the Edict of Pistres mandated the building of bridges across the Seine River in response to the sack of Paris by Vikings in 845 A.D.

This strategy proved effective during the Siege of Paris in 885 A.D. as Viking ships were unable to pass beyond the bridges crossing the Seine.

There are now thirty-seven bridges crossing the Seine River within the city limits of Paris. Of these 37, only five are pedestrian bridges. Here are some of the most iconic bridges in Paris.

Visiting bridges instead of a museums is a pretty alternative way of visiting a city and a great way to feel part of its fabric.  If are looking for other interesting things to do check out our Le Marais Food Tour in Paris.

The Pont des Arts connects the Institut de France with The Louvre. The bridge was originally constructed in 1804 during the reign of Napoleon.

The original Pont des Arts suffered two aerial bombardments during World War I and II, as well as numerous collisions with boats before collapsing in 1979 after a ship rammed into it.

The present-day bridge was built in 1984 and is now a UNESCO World Heritage Site along with the rest of the Seine Riverfront in Paris.

The Pont des Arts is most famous for being the Lock Bridge in Paris. Visitors to the bridge attach personalized padlocks to its railing and throw the keys away in the Seine River.

Despite the government of Paris removing many of the locks in 2015, over a million more (approximately 45 tons) have been placed on the bridge since then.

The Passerelle Simone-de-Beauvoir is named for French philosopher and activist Simone de Beauvoir and is the most recently-built bridge in Paris.

Completed in 2006, the Passerelle Simone-de-Beauvoir is used solely by bicyclists and pedestrians and leads to the Bibliothèque Nationale de France, the French national library.

The modern design of this footbridge boasts a lens-shaped structure that does not touch the water at any section of the bridge. Its supports rest on the banks of the Seine River at each side.

The bridge debuted at the Exposition Universelle in 1900 along with the Grand Palais and Petit Palais.

The Pont Alexandre III is built in alignment with Les Invalides and connects its buildings and the Eiffel Tower with the Champs-Élysées. The bridge’s exuberant design is featured in cameo appearances in movies such as Ronin, Midnight in Paris and Anastasia.

The Pont Neuf is Paris’ oldest existing bridge across the Seine River. The bridge is located on the westernmost point of the Île de la Cité, one of Paris’ two natural islands in the Seine River. Henry IV completed the construction of this “new bridge” and inaugurated the structure in 1607. Visitors to the Pont Neuf will enjoy its many sculptures including the mascarons, stone masks that line the side of the bridge, and the bronze statue of Henry IV on horseback located at the crossing of the Île de la Cité. 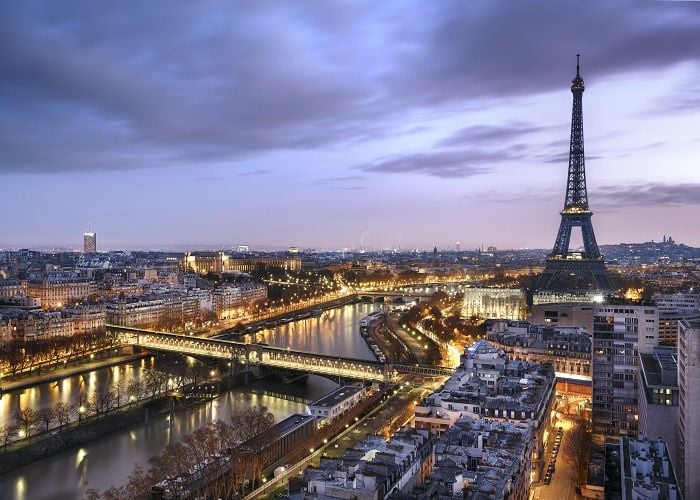 Formerly the Pont de Passy, the Pont de Bir-Hakeim is named for the World War II Battle of Bir-Hakeim which involved French and German forces in Africa in 1942.

This dual-level bridge hosts one level for pedestrians and motor vehicles and another level with a railway viaduct. This steel bridge passes through the artificial island of Île aux Cygnes, where visitors will see a replica of the Statue of Liberty.

The Pont de Bir-Hakeim makes cameo appearances in blockbuster movies such as Inception and National Treasure: Book of Secrets.

It’s also a great place to look out over Paris’ most famous attraction: the Eiffel Tower. If you’re looking to learn more about it, we wrote the Eiffel Tower Travel Guide, including the 10 things you must know before you visit. 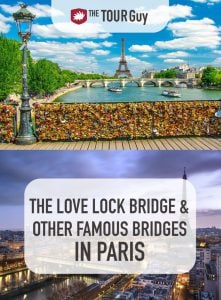