Located in the very heart of Florence, Piazza della Signoria, Palazzo Vecchio is something you absolutely have to see while enjoying your trip in this Italian city. Its architecture and style represent a perfect manifesto from the 13th century and its beauty has always remained the same. Let’s take a closer look to Palazzo Vecchio history and present to know this astonishing landmark a bit better!

Of course, the content you’re reading here is free, but did you know we also sell tours for reasonable prices? We offer several Florence tours, including small group and private Uffizi Gallery tours, Florence walking tours with the David Statue and more.

Palazzo Vecchio Throughout the Ages

Often in Italy, many landmarks are actually built above some former constructions and Palazzo Vecchio makes no exception. This landmark is in fact built above an ancient Roman theater. This part of the city remained the same until the 13th century when the city of Florence decided to build new construction to protect some of the city judges. The architect entrusted with the project ended up being Arnolfo di Cambio. The artist, as much as his co-workers, was very well aware of the presence of the Roman theatre and its rests were then used as prisons. For almost two centuries, Palazzo Vecchio was used by the city of Florence for this purpose, but during the 16th century, it became the Duke’s main residence. 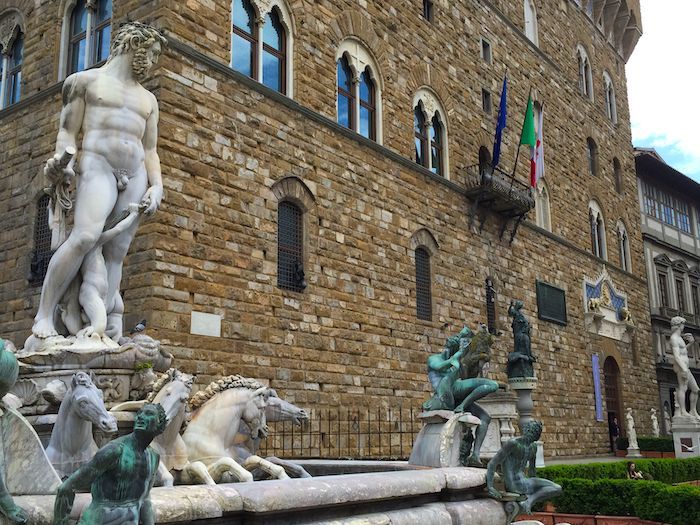 The imponent façade of Palazzo Vecchio is not hard to find once in Piazza della Signoria. Built by using the most important stone from Tuscany, the so called pietraforte, this façade showcases its brown tones and has never changed throughout the ages. Some of the most important Italian artists contributed in the decorations. Among others, Donatello sculpted the Judith and Oloferne group which were then removed and exposed at the Uffizi Gallery. Of course, it’s fundamental to mention another sculpture: Michelangelo’s David, located right in front of the entrance. This art masterpiece is now exposed at the Accademia Museum but, a perfect copy of it is displayed outside Palazzo Vecchio. 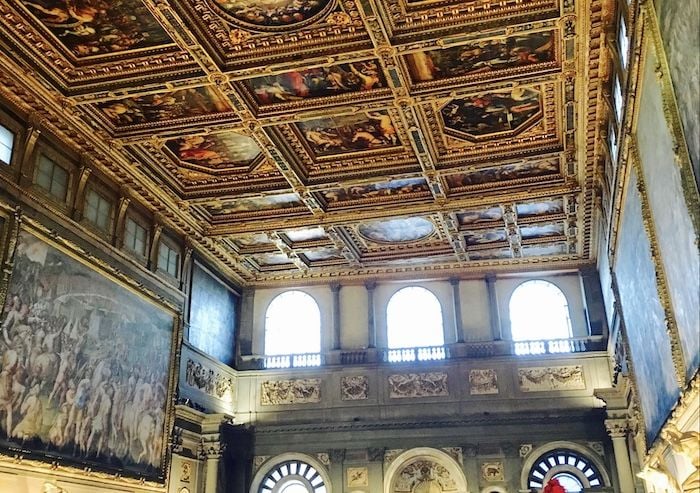 Palazzo Vecchio has always maintained its former structure. The most famous room to visit is the Cinquecento Salon or, in Italian, “Salone dei Cinquecento.” This room is fifty-three meters long and it’s fully decorated with frescos. What we can admire today is some frescos created by the Italian historian, architect and artist Giorgio Vasari, entrusted by Cosimo 1st with this work. These frescos have, anyway, a peculiar history. Apparently, the artist covered some of the frescos created by Leonardo da Vinci and Michelangelo which, anyway, art historians are still looking. This history inspired even Dan Brown’s best seller Inferno.

Behind the Cinquecento Salon, you might encounter a small room. That’s Francesco de Medici’s personal studio. Vasari was directly entrusted with the decorations of this area too. Francesco de Medici then added his sculptures and paintings collection, which are still showcased today. Once there you might find some of the art pieces created by some masters such as Giambologna and Bartolomeo Ammanati. Also, if you keep walking, you might find some stairs. This path will lead you to another smaller studio: the one where Francesco used to keep all his mirabilia, particular objects collected throughout the years.

Palazzo Vecchio is one of the highest towers in Florence. You might observe it from several parts of the city. This part of the palace was built in 1310, when all the works were almost finished. This tower, in fact, is not perfectly placed at the center of Palazzo Vecchio but, instead, along the south side. The Arnolfo tower was the center of some important facts in Florentine history. Here, in fact, some personalities such as Cosimo de Medici and Savonarola were incarcerated and served as prisoners for several years.

Palazzo Vecchio and its Courts 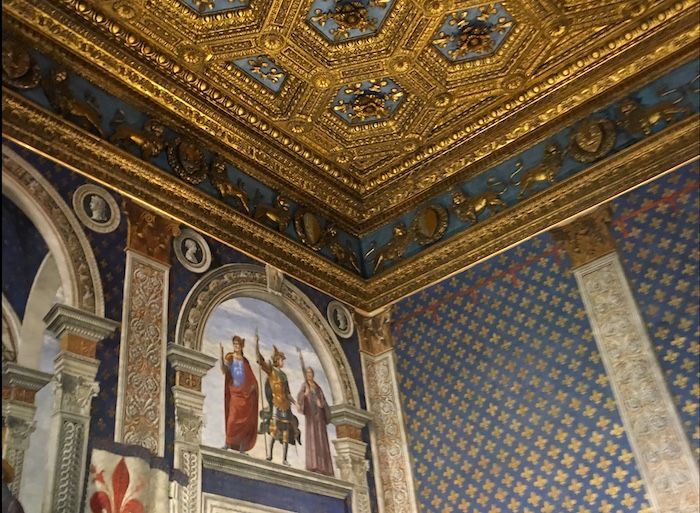 As soon as you step into Palazzo Vecchio, you will find several courts, built one after another. During the Renaissance, courts were important places to meet and discuss, even about some important business and, due to this reason, their decoration and realization were fundamental. The first court you will see was formerly decorated by the Italian artist Michelozzo, and then redecorated in a more mannerist way by Vasari. All the frescos showcased are an homage to the ancient workers’ federations that used to exist in Florence during the Renaissance. The second court, also called the Customs court, was used to receive products from other cities and it was built one century after. 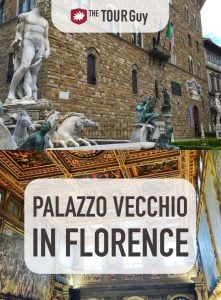 Want a great experience in Florence?