Both traditional and cosmopolitan, local and global, conservative and vanguardist, Barcelona has been defined as the “great enchantress”, the “rose of fire” and the “city of wonders”. Here are the top ten things to see in Barcelona and our best tips on how to experience each. 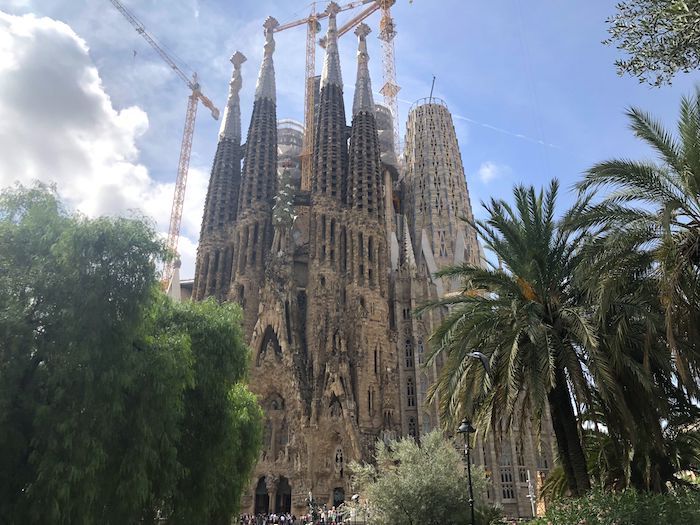 Sagrada Familia, the most visited monument of the Iberian Peninsula, was produced by the mind of Gaudí when he was at the peak of his genius and under spiritual distress. Antoni Gaudí, the modernist genius whose buildings attract millions of visitors each year, finished only the Nativity Facade when he was alive.

He left, however, a complete design of the rest of the building for others to follow his path. The unfinished cathedral, full of wonders produced by Gaudí’s unbounded creativity, is expected to be finished in 2026, one hundred years after his death. We recommend skipping this lines and exploring Sagrada Familia’s Tower on our guided Sagrada Familia tours. 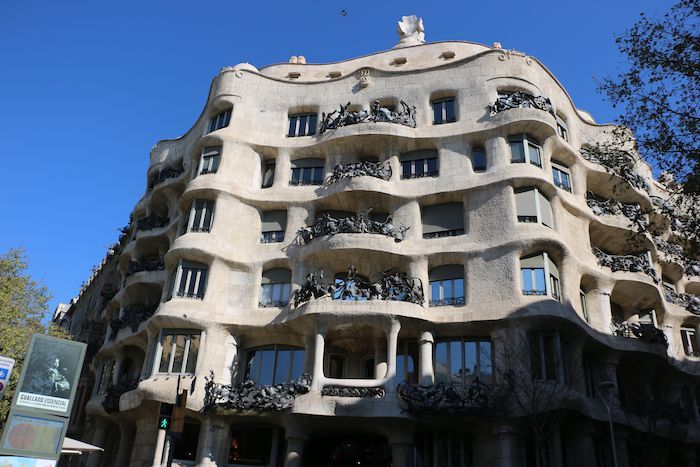 When in the 19th century, Barcelona finally demolished its city walls, a new district, the Eixample, was developed around the Old City. Here, industrial tycoons and wealthy families were eager to build larger and fashionable residences, as well as invest in apartment buildings. As a result, Passeig de Gràcia and the streets around, the area known as the Golden Square, is full of magnificent buildings of different styles, including the most renowned modernist buildings of Barcelona.

The Golden Square is not its own district, it’s just an area part of Eixample. Most international luxury brands have shops in Passeig de Gràcia, and in the area there are plenty of restaurants and cafes for those who prefer to relax in a posh ambiance.

How to get there:

Visit Gaudí’s Casa Milà, also known as the quarry, and Casa Batlló that looks like a dragon and has amazing ceramic decorations. Pay attention to the neo-medieval style and the wall decor of House Ametller next to Casa Batllò. It was built by Puig i Cadafalch, author of House Terrades and Palau Baró Quadras, also in Golden Square.

If you’re looking to skip the lines at Gaudi’s best sites, check out 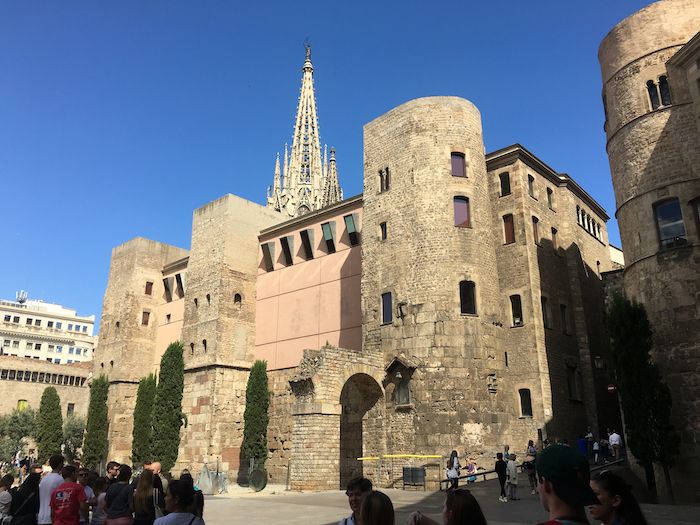 A visit to the Gothic Quarter is a time-travel experience to explore the history of the city from the Roman times to the present through the structures that have endured to our days. In the narrow, dark and sometimes stinky alleys of the Gothic Quarter, Roman walls coexist with medieval religious buildings, royal and noble palaces, guild headquarters and merchant houses.

How to get there: Metro, Ferrocarrils and Rodalies Plaça Catalunya, Metro Urquinaona and Jaume I. Buses V13, V15, H12, and D50

Visit the Cathedral and look around for the Roman gate, walls and aqueduct. Walk to Plaça del Rei and turn around to see Palau del Lloctinent, Palau Reial Major, the royal chapel of Santa Àgata and the medieval palace Clariana-Padellàs,  house of the Museum of History Barcelona.

Visit the Cathedral and look around for the Roman gate, walls and aqueduct. Walk to Plaça del Rei and turn around to see Palau del Lloctinent, Palau Reial Major, the royal chapel of Santa Àgata and the medieval palace Clariana-Padellàs,  house of the Museum of History Barcelona.

Quote from an Expert:

Our Head of Digital, Antonio Costa says,”try to walk around the Gothic Quarter and get lost. There are a lot of cool things to see there. When I lived in Barcelona, I would often try to explore new places in the Gothic Quarter, and one time I came across a little garden next to La Rambla. I took an elevator upstairs, and there was just a garden no one seemed to know about. It’s called Jardí de la Casa Ignacio de Puig.”

Ramblas was originally a dry ravine running alongside Barcelona’s medieval wall, while Raval was a quarter established by farmers across the Ramblas. Raval was soon populated with convents, monasteries, the first hospital of the city and several charity institutions during the medieval times but Ramblas remained as an open sewer for centuries.

When it was finally urbanized during the romantic times of the early 19th century, it became the most wanted zone of the city. Raval, on the contrary, became a cheap housing area, the point of entry for new immigrants and a red-light district.

Today, Ramblas is still the most famous street of Barcelona, a promenade full of life with plenty of interesting sites to see, while Raval, thanks to recent renovation efforts, has become a popular cosmopolitan quarter where foreign population speaking more than 100 different languages coexist with historical landmarks, modern architecture and urban culture

Walk down the Ramblas from Plaça Catalunya. Stop by the Liceu Opera House, the Plaça Reial, Gaudí’s Palau Güell and Columbus Monument. Once there, visit the amazing building of Drassanes, a medieval shipyard, that now houses the Maritime Museum. In Raval, enjoy the atmosphere of Rambla del Raval, walk the narrow streets to experience the sounds, smells and colours of its multicultural dwellers. Find the medieval Hospital de la Santa Creu, now housing the Catalan National Library, and explore modern art and urban culture in MACBA and CCCB. 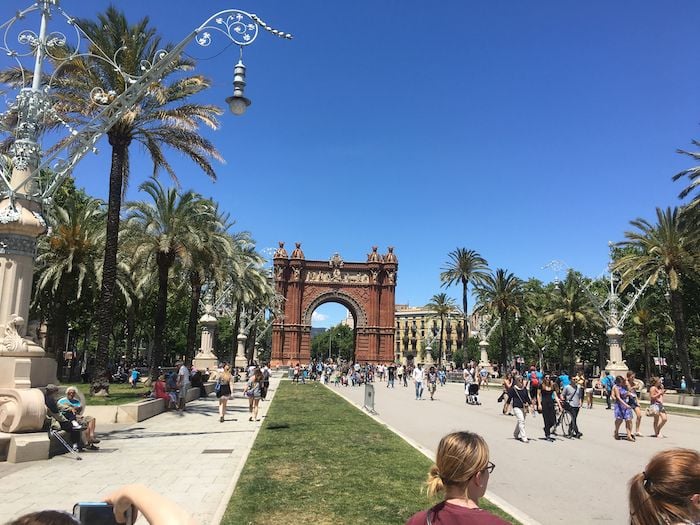 Born, Barcelona’s seafarers quarter, was partially demolished to build a huge military fortress following the defeat of Catalonia in the Spanish Succession War. The hatred fortress, known as the “Ciutadella”, was garrisoned to watch the city and served as a political prison.

In the mid-19th century, it was demolished and replaced by a victorian-style park that took the name of the fortress. The central market of Barcelona, luxurious apartment buildings and Barcelona’s first museum were also built on the site. Few years later, Parc de la Ciutadella was deeply transformed to house Barcelona’s first Universal Exhibition in 1888. Today, the area of Born and Ciutadella is a favorite destination for locals during the weekend.

In Born, lively bars, restaurants, craft workshops and art galleries proliferate next to buildings and relics related to the convulsed past of the area. Park de la Ciutadella is usually crowded with city dwellers and visitors alike to sunbathe on the grass or to participate in the festivals often organized there.

Enjoy Born’s lively atmosphere having some late-night drinks. Look for art workshops on the narrow streets. Visit Santa Maria del Mar Church and Picasso Museum. Enter Born Market, under an amazing Victorian iron structure you will find the largest European archeological site from the Enlightenment, a frozen city created by a vengeful Spanish king. Cross the street into Parc de la Ciutadella and experience the familiar and friendly atmosphere.

Once there, visit the zoo and the Catalan Parliament to see a group of buildings that were formerly part of the fortress. Explore the parc looking for Universal Exhibition relics such as the restaurant (Zoology Museum), a greenhouse and a shade house and the fences attributed to Gaudi. Leave the park and take a selfie on Arc de Triomf, erected to be the main gate of the Fair. 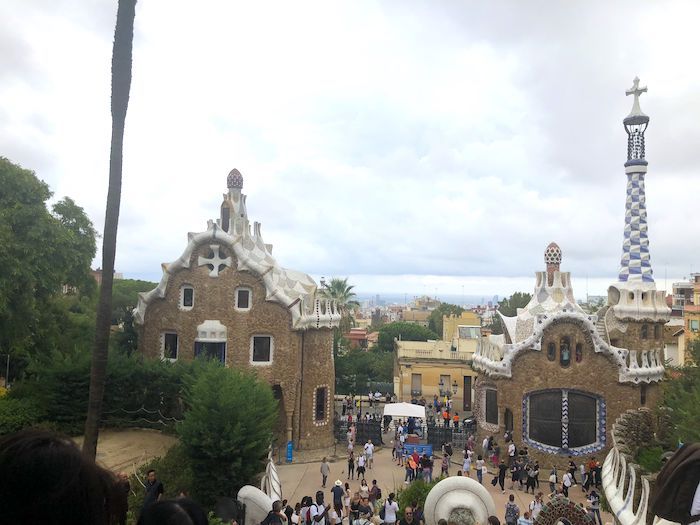 Eusebi Güell, the leading industrialist of modernist Barcelona, asked Gaudí to urbanize a big property he owned in the foothills of Tibidabo to develop a private housing initiative addressed to wealthy Barcelonians. Gaudí did a fantastic job. He created a garden city completely unique, providing access to the different plot of land by means of viaducts fully integrated in the landscape.

In the communal areas, he instead designed buildings and structures suitable for a fantasy world. Unfortunately for Güell but fortunately for us, the business idea of Güell failed miserably and after his death, the family sold the place to the city council. Since then, Park Güell is a public park where we can still admire the ingenuity of Gaudí.

Walk the park and explore the viaducts. Enjoy the vantage point of the big plaza and discover the vanguardist ceramic medallions on the ceiling of the Hypostyle Room and take a picture in the staircase next to the salamander. Keep going downstairs and admire, on both sides of the main gate, the fairy tale reception building and the humble but beautiful porter’s house. Turn around and see how Gaudí plays with perspective to astonish the observer with the view from the entrance.

Barcelona became global thanks to two major events that took place in the hill of Montjuïc. In 1929, an International Exhibition brought to the hill dozens of pavilions and structures that never were dismantled. In 1992, Montjuïc was chosen as the central venue of Barcelona’s Summer Olympic Games. Nowadays, a visit to Montjuic is an exploration of the rich heritage remaining from these events, but also a way to escape the noise of the boisterous city.

Visit Olympic Stadium and look around for the other Olympic venues. Explore the Botanical Garden to learn about Mediterranean vegetation. Climb to the Montjuic Castle or take a stroll on the seaside path to enjoy the views of the busy harbor and the Mediterranean Sea.

Doctor Andreu, famous for his cough pills, had a dream 120 years ago. In the summit of Tibidabo mountain, he led a real estate development that included a private amusement park and a funicular to provide easy access to the top of the mountain.

The housing initiative failed, but both the park and the funicular have survived. Parc d’Atraccions del Tibidabo is nowadays Europe’s second oldest amusement park, and it has the best view of the city. The lookout area is an open public square with several food stalls.

Enjoy the city views, ride the oldest attractions of the park (plane, carousel, watchtower and ferris wheel) and visit the automaton museum 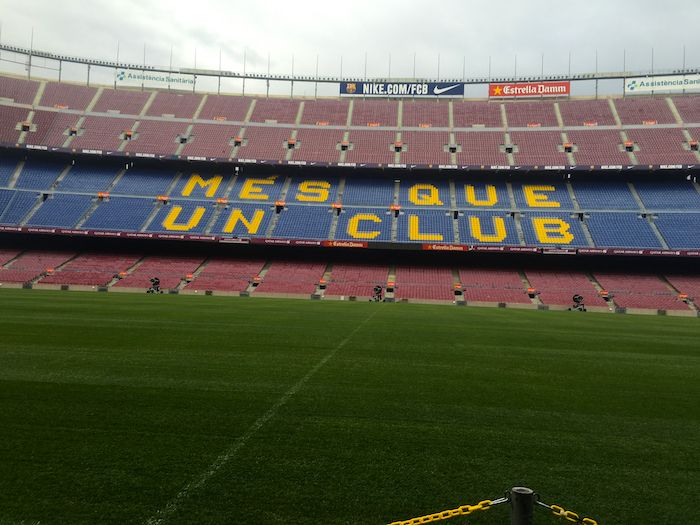 Camp Nou is the stadium of FC Barcelona, the renowned soccer team. The site is a must-to-see place for soccer fans but also for those who want to understand why this historical multi-sport club is so important in the ethos of the local population.

Visit the museum, which includes the collection, access to the actual changing room, the press conference room, and obviously, the stadium and the playing field. 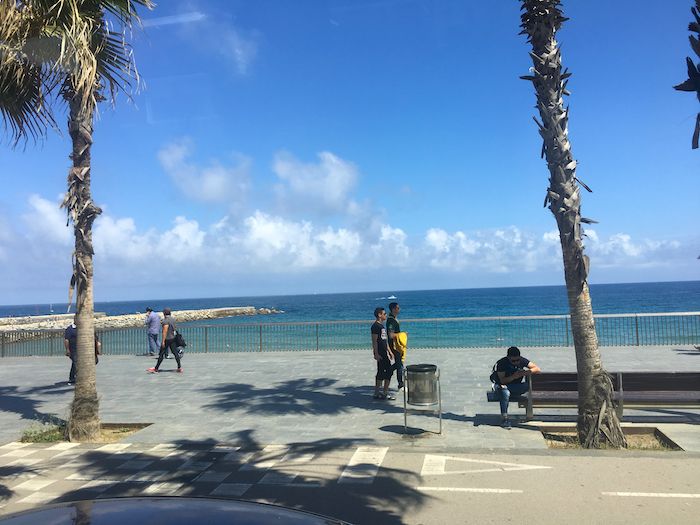 Lay on the clean beaches, stroll the pedestrian areas, eat in a popular restaurant or visit one of the many tourist attractions that populate the coastal line. The seafront has three main areas of interest: the historical fisherman quarter of Barceloneta and the old harbor, both attached to the old city; the area that was transformed during the Summer Olympic Games of 1992, and the area regenerated thanks to the Forum of Cultures of 2004.

Barceloneta and Old Harbour Area: In the Old Harbour the main attractions are the Aquarium and the Museu d’Història de Catalunya. Visit the Barceloneta Market, lay during the day or party at night in Sant Sebastià beach.

Olympic Area: Explore Olympic Village. Dine in a “xiringuito” (beach bar) and party at night in the discotheques of Olympic Harbour. Play volley beach with locals and expats in Nova Icaria beach.

Forum Area: Visit Museu de Ciències Naturals located in the Forum building, a masterpiece of Herzog & de Meuron, Pritzker Prize winners, and erected as the central building of the Barcelona’s 2004 Forum of Cultures. Take a stroll in Parc del Forum and in Parc Diagonal Mar. Swim in the bathing area next to the huge photovoltaic solar power plant.