Home > France > Visiting Versailles: Everything You Need to Know 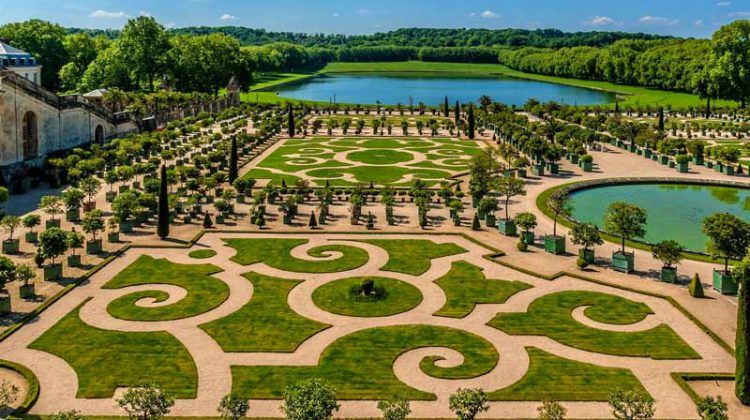 Located only a short distance outside of Paris, the Château de Versailles housed the kings and queens of France until they were chased out in 1789 during the French Revolution.

But luckily for us, the Palace of Versailles still stands in all its glory. However, because it’s so popular, make sure you’re prepared.

Before you visit Versailles, read these tips and tricks.

I love bookmarking helpful articles when planning a trip.  If you find this article helpful, consider making a “Paris” folder in your browswer and saving it so you can circle back to it.  We also have an excellent post on where to stay in Paris – hotels & airbnbs.

This post explains everything you need to know to visit Versailles. We are a tour company because we believe the best way to see it is with a guided tour.  Check out our guided small group tour of Versailles that starts in Paris!

What This Article Covers:

Now a UNESCO World Heritage site, the Palace of Versailles received 7,700,000 visitors in 2017. Behind the Louvre, it’s the second most visited monument in the Île-de-France region. And while the Palace was stripped of all its furnishings after the French Revolution, many of the palace rooms have been restored to enjoy.

While everyone tends to talk about the palace itself, the Gardens of Versailles are equally as impressive. They took 40 years to complete and to maintain the intricate design, they need to be replanted approximately once every 100 years. Today, it still takes painstaking work to manage them. For example, after a major storm in 1999, over 50,000 trees had to be replanted. 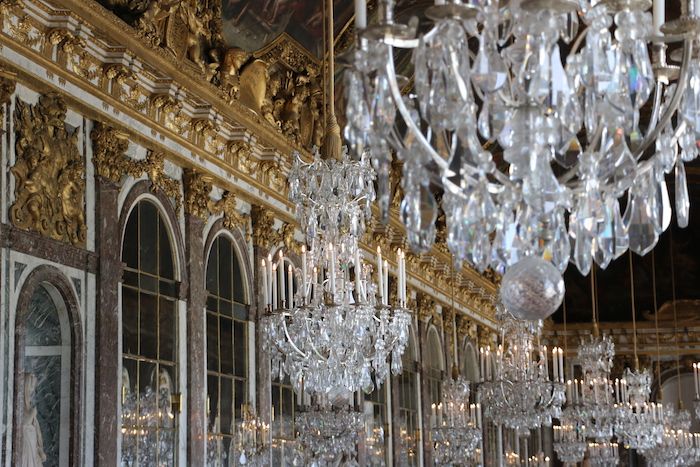 Opening hours for the Château de Versailles and its gardens differ depending on the time of year. In summer, expect more people and bigger crowds.

From November 1st to March 31st:

From April 1st to October 31st:

Everything about purchasing Versailles tickets are confusing, but we’ll try to simplify it for you.

The best way to book tickets on the official website and you should purchase as soon as you know your dates.

What About Guided Tours?

If you’d rather let someone else handle reserving the tickets, consider booking a Versailles Palace and Garden tour with an English-speaking guide.

Not only does our Versailles tour include skip the line tickets, but it also includes round-trip train tickets from Paris and an introduction to the Gardens of Versailles. Your guide will point out the things you should pay attention to and give you insider information you won’t get by yourself or from an audio guide.

How Much Do Tickets Cost by Yourself and Which One to Buy?

If you decide to go it alone, an €18 ticket includes audio guide and gets you access to the palace. Access to the gardens is free, except on select days when there are special events taking place in the gardens (between April and October).  The fountain show is almost every day when weather is nice.

On these days, you’ll have to purchase a separate ticket to enter the gardens. A musical fountain show ticket (when the garden’s multiple fountains are synchronized to music) costs €9.50, and a musical garden ticket (when music is played throughout the gardens) costs €8.50.

If it sounds confusing at this point that is because it is confusing.  We exist as a tour company to make it easier. ( ;

The Grand and Petit Trianon are two smaller palaces (much smaller than the Château de Versailles) which were built as a sort of retreat for King Louis XVI and Queen Marie-Antoinette. Many people choose to forgo these two palaces in order to spend more time in the gardens but they are super cool.

The Château de Versailles is not actually in Paris, but in the city of Versailles, France.  That said, we will tell you how to get to Versailles from Paris.

There are three ways for you to get to Versailles from Paris.

Check out our Youtube Video on getting to Versailles.

Use the RER C to get to the Versailles Château – Rive Gauche train station. Once here, you’re about a 10 minute walk to the palace, but signs will clearly indicate which way to go. The stations that connect to the RER C in central Paris are:

You’ll need to buy a special metro ticket to get to and from Versailles – A round trip will cost you €7.10. Using a metro ticket machine, make sure you indicate that your destination is the Versailles Rive Gauche station (there are three destinations in Versailles, so you need to choose the right one). If you’re worried about buying the incorrect ticket, purchase the tickets from a metro service agent. Depending on your departure location, the train will take you anywhere from 30 to 60+ minutes, so plan accordingly.

Insider tip: Purchase both your tickets (to and from Versailles) while you’re in Paris. If you buy your return ticket to Paris at the Versailles station, there will likely be dozens of other people doing the same thing and the lines can get long.

A second bus option: Bus 171 will take you to the palace from the Pont de Sèvres area, accessible by metro line 9 for the cost of a normal metro ticket (€1.90, or €2 if you purchase onboard the bus). This will be a minimum 30 minute ride.

Take all the guesswork out and arrange to visit the Palace of Versailles with a tour guide. We take the train to get there and you won’t have to worry about which Versailles stop to get off on – because there are two! 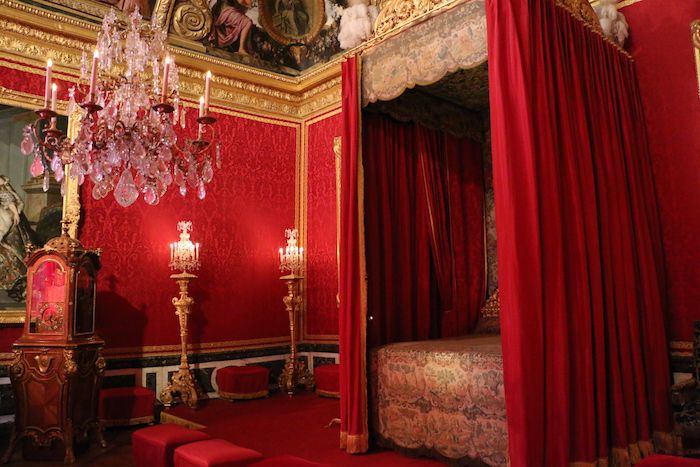 The Château de Versailles gets most of its visitors on weekends and on Tuesdays. Especially during summer, you’re going to have to get a little strategic. Arrive as early as possible to tour the palace. Yes, that might mean waking up early, but it’s worth it! We suggest arriving right at opening time, if not a little before. Avoid touring the palace in the late morning and afternoon, when crowds are at their peak. If you decide to visit Versailles in the afternoon, we suggest touring the gardens first. Then, circle back around in the later afternoon or evening for the palace.

If you’ve reserved your ticket online and you’ve already printed it, go directly to entrance A of the palace with your ticket. If you didn’t purchase a ticket in advance, try to go inside and buy your ticket at one of the automated ticket machines. Many people don’t realize these exist.

Strongly consider packing a picnic. The food options at Versailles aren’t the best. Picnicking is allowed the gardens, so bring a sandwich from a bakery or hit up a market on the way to your train to Versailles.

You can check out Marche du Notre Dame which is a market to buy your picnic items including some vin!

Bikes are available to rent in the Versailles gardens. Electric vehicles (golf carts) are also available to rent for those with limited mobility. To find out more about these options, click here, then click on “Leisure and transport”.

6. What to Do and See in Versailles

The amount of time you want to spend in the Gardens of Versailles may depend on the time of year. While they are beautiful year-round, the gardens are most impressive in late spring, summer and early fall when the weather is nicer.

Built for Marie-Antoinette in 1783, the Queen’s Hamlet is best described as a group of rural cottages that look like they belong in a fairytale. The queen used to take long walks here to relax, and it’s not hard to see why. The hamlet served as a functioning farm, and there’s still a variety of animals including goats, sheep, ducks and more.

Undoubtedly the most beautiful room in the entire palace, the Hall of Mirrors will take just about anyone’s breath away. This room wasn’t just famous during the French royal era – the Treaty of Versailles was signed in the Hall of Mirrors in 1919, which ended World War I.

Picnic in Versailles (Pick up supplies before entering gardens)

I mentioned this above, but I recommend it enough to mention it twice.  If you rent a bike in the Versailles gardens you can bring a picnic which makes the day really relaxing.  The gardens are so big you won’t want to walk to the most remote areas no matter how athletic you are.

You can get your supplies at Marche du Notre Dame including vin!

Jeu de Paume ( Royal Tennis Court) –  If you are a history geek like me, then you will find this place fascinating. As the name implies, this was originally a tennis court back in the 17th century ( yes they did play a tennis-like game back in the day).

Gift Shopping Near the Palace of Versailles

Passage de la Geôle – Passage in French means a covered hallway and in this one you can find all kinds of really cool antique shops where you can get anything from jewelry to antique furniture. Shop around and you might even find something owned by a nobleman or noblewoman from back in the day! It’s also just a stone’s throw from the market, so you can hit two birds with one stone. Its also perfect for nerdy gifts to bring back Grandma.

Louis XIII had been hunting in Versailles as early as 1610 and liked it very much.  He built (had people build for him) a small hunting lodge there which he first used in 1624

The palace used to stink. While it smells fine now, hygiene practices (or the lack thereof) in France during Louis XVI’s reign meant that the palace smelled like urine, fecal matter and more. Some claim that a lack of toilets in the palace even led some visitors to relieve themselves behind curtains and pillars. Yikes!

Louis XIII decided to rebuild his hunting lodge into somethign more suitable for a king.  His construction became the basis/foundation for what we see today.

Like his father, Louis XIV very much appreciated Versailles and saw potential in what it could become.  Like many homeowners today that watch too much HGTV, Louis the XIV worked on the palace for his entire life.

Be built wings, chapels, courts and pavilions.  What you see today is centered around the works of Louis XIV.

The court abandoned Versailles for Vincennes for a period of at least seven years and the grounds were not kept up with. You wouldn’t know today as the grounds are immaculated.

Louis XV did not live in Versailles nor have the deep appreciation that others had fo rit.

Louis XVI, the most infamos of all French Kings, was engulfed by Versailles.  It was his entire world and became his wife’s world as well.

The famous Marie-Antoinette appreciated everything Versailles had to offer.  She even resided in a borgo that resembled a little town – in her mind only.

The French Revolution left Versailles in surprisingly good condition.  The King left Versailles at the start of the revolution in 1789 and surpringly enough, the building actually underwent significant repairs between 1789 – 1792 when one of the most famous couples in history were sent to the guillotine.  Louis XVI first and Marie Antoinette 9 months later. 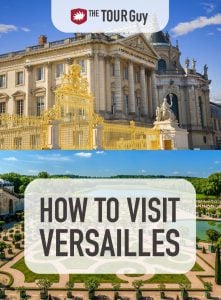