Home > Italy > Why is the Trevi Fountain Famous? 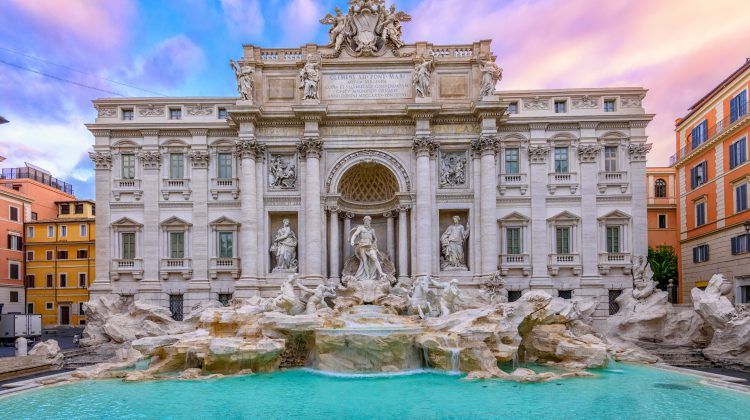 There are few monuments that you can visit that will actually take your breath away upon your first glimpse. I can say with certainty that the Trevi Fountain is one of them.

The fountain is not only beautiful, but entwined, like most things in Rome, with an amazing history.  This article will explain why the fountain is so famous.

They say that it takes a month to see everything in Rome, so make sure you plan accordingly when you come. If you are not sure how many days you need, check this blog on How many days should you spend in Rome.

If you don’t want to do all the heavy lifting yourself, we got you covered with our Best Rome Tours: Guide to Rome’s Experiences with Videos + Map.

As with pretty much everything else in Rome, the Trevi Fountain is associated with some fascinating history. It just so happens that if you were to drink from the Trevi fountain ( not allowed) you would be drinking water from the same source that Ancient Romans did 2,000 years ago!

As the legend goes, General Agrippa, who was the closest friend of the Emperor Augustus, was looking for water with his troops. All of a sudden, a virgin appeared and pointed to the ground, where upon digging, the soldiers found water.

At this point, the aqueduct called Aqua Virgo was created. The aqueduct runs more than 12 miles and the fascinating part is that most of it is underground, bringing the water in using gravity!

Fast forward to the middle ages, when all the aqueducts were destroyed in Rome and even the aqua virgo built underground had come to a trickle. Various popes attempted to clear out the tunnels and bring fresh water into the city. The aqua virgo was cleaned out and its ” terminus” or end point was where you can see the fountain today.

In 1730, Pope Clement XII organized a contest to build a fountain at the terminus point. Remember that in the 18th century, Rome was at its peak of Baroque art, so everything had to be monumental and grand- think Spanish steps.

The competition was actually won by a Florentine, but due to the angry Romans demanding a Roman build it, the Pope relented and gave it to Nicola Salvi. The fountain was finished in 1751 after Salvi’s death.

The fountain is built at a corner of three streets. The words tre vie mean three streets so now you know where the name comes from!

The imposing fountain is dominated with the central statue of Oceanus ( not to be mistaken by many who think it is the God Neptune). He is reigning in two horses- one is calm, one is violent which signifies the various moods of the sea.

Made from Travertine stone, which is a porous limestone great for building and is also the same stone used to build another famous monument- The Colosseum! 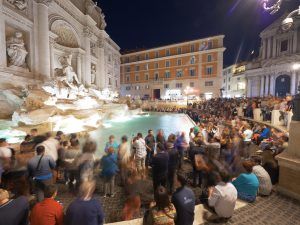 I have what I call an impact scale from 1-5 which is when you see something for the first time, how it ” hits” you. This fountain definitely ranks up there as a 5 together with the Colosseum and Sistine Chapel.

One of the reasons is that you are walking down some charming winding roads, and then all of sudden, out of nowhere-literally the most beautiful fountain you have ever seen just opens up in front of you.

The water is gushing out and the crowds are there jostling for a great pic, creating this almost surreal atmosphere. I still remember the first time that I saw it over 20 years ago- it’s that memorable.

By now you understand that the fountain is pretty famous. A further testament to that are the films that involve the fountain.

The main ones you might have heard of are Roman Holidays ( 1953), 3 Coins in the fountain ( 1954) and La Dolce Vita ( 1960), with the last one featuring the famous scene of Anita Ekburg seductively wading through the fountain. These films catapulted the fountain onto the international stage.

Visiting today and how to beat the crowds 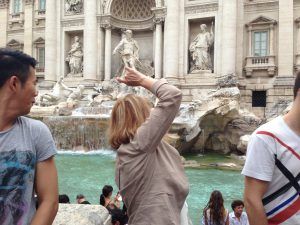 When you visit the fountain, the tradition is to throw a coin into the fountain over your left shoulder. Tradition says that 1 coin will bring you back to Rome

and 3 will ensure the wedding bells come, so be careful what you wish for! Feel free to throw more than 1 coin, since all the coins thrown in, go to a charity called Caritas which feeds the poor.

The fountain is crowded most of the day, so if you want to see it without the crowds, then I highly recommend you get there before 9am or after 11pm at night.

Remember not to jump in the fountain! The local police will definitely catch you and will slap you with a 500€ fine!