Home > France > Visiting the Louvre: Everything You Need to Know to Plan 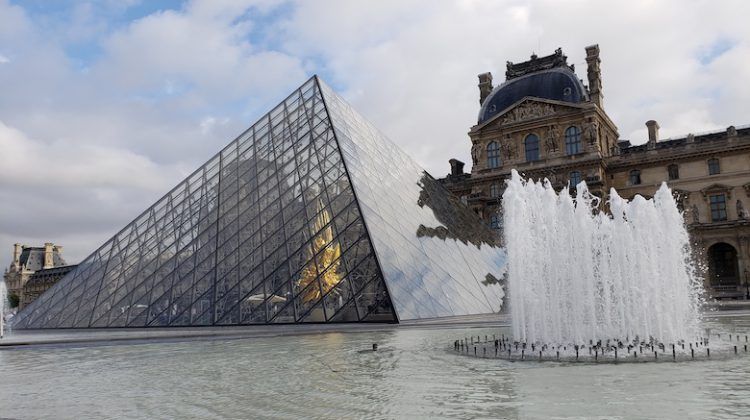 The Louvre Museum is considered by Forbes the world’s greatest art gallery.

Yet, the very concept of a public place where citizens could appreciate art did not exist at the time it was built.  The great collection that spawned here was for the eyes of royalty and nobility only.

The idea that the general public could visit The Louvre was, at best, vulgar.  Once a medieval fortress, eventually a royal palace, it took hundreds of years for this structure to become the greatest museum ever made.

For me, planning travel is an ongoing operation. When I see things I like, I bookmark them for a potential future trip. If you like this post, bookmark it in a “Paris” or “France” folder for your next trip.

In This Article You’ll Find

Before you plan anything else, you need to know the Louvre museum hours. Luckily for you, the Louvre is open nearly every day of the year from 9:00 A.M. to 6:00 P.M., except on Tuesdays – when the museum is closed. The museum also has a night opening on Wednesdays and Fridays where the museum stays open until 9:45 P.M.

Keep in mind that the Louvre is closed on January 1, May 1, and December 25.

Pro Tip: If you can, try to visit the Louvre in the evening for a more intimate experience. It’s typically less busy; giving you a chance to view the exhibits longer.

Major Works of Art at the Louvre Museum

Read our article on the top 10 things to see inside the Louvre for more in-depth descriptions, location, maps and photos of each of the above listed artwork.

History of the Louvre:

Birth of the Louvre: 12th Century 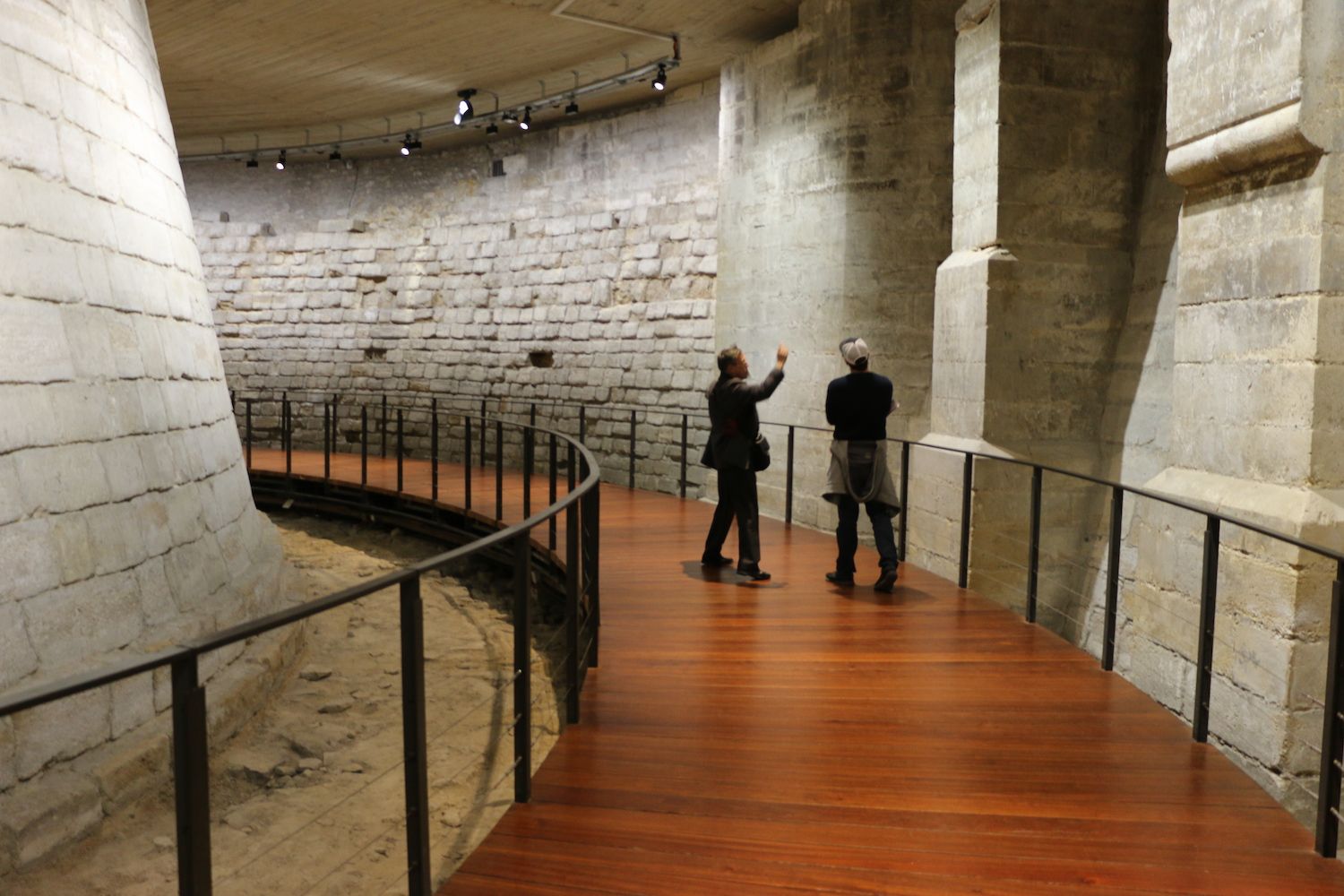 We have war to thank for the creation of the Louvre.  In the 12th century, Philip II ordered a fortress built, fearing an English invasion.

Twelve years later, this site was erected on grounds already named “The Louvre.” The surrounding forest was inhabited by wolves (loup in French), so thick fences were strategically built near the Seine.

The stronghold was so impenetrable, it was the gold standard of fortresses. 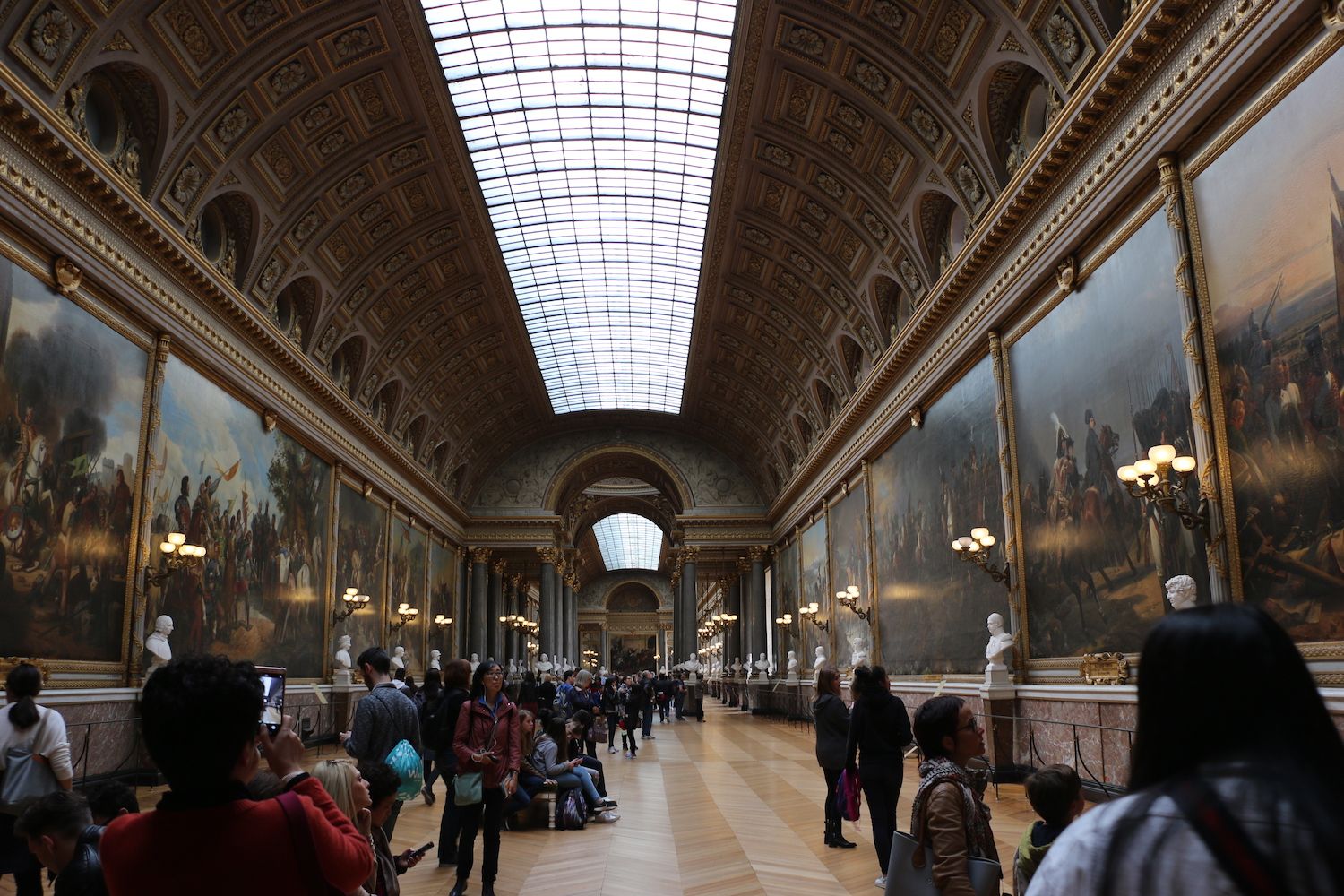 In the 14th century, Charles V finally defeated the English and became the first king to consider The Louvre a residence.

He hired Raymond du Temple to transform the forte into cushy quarters fit for a king.

This paved the way for Francois I, who demolished the fortress in 1546 then rebuilt the Louvre into the renaissance paradise he would call home.  His Grand Galerie connected the Louvre to the Palais Tuileries.

Francois I erected structures all over France, including the Hotel de Ville in Paris and the Château de Fontainebleau.  Francois I also convinced Leonard da Vinci to move to France, whereupon da Vinci would live the final years of life.

After da Vinci’s death, Francois I bought three paintings from da Vinci’s assistant.  The Virgin and Child with St.Anne, the St. John the Baptist and The Mona Lisa.

Francois I practiced his admiration of this painting by commissioning a portrait of himself in a similar fashion, gazing at the viewer, breaking the fourth wall.  Francis Clouet’s rendition of Francois I can be found in the Louvre, along with the three da Vinci paintings.

His heir, King Louis XIII, expanded the wings of the Louvre, creating wall space that continued for miles, accentuated by the Cour Carree, the open court that began construction with Francois I.

This avenue of gold accentuated the King’s relationship with God. Kings were thought so divine, they could cure diseases like tuberculosis by a simple touch.

By 1682, however, the Louvre stopped expanding, as The Sun King favored Versailles as his residency, allowing artists to move into the Louvre.  Four generations of artists lived there, and even during the French Revolution when the Louvre was finally opened to the public, artists remained.

It was not until Napoleon became Emperor and renamed the museum “Musée Napoléon” that artists dispersed. 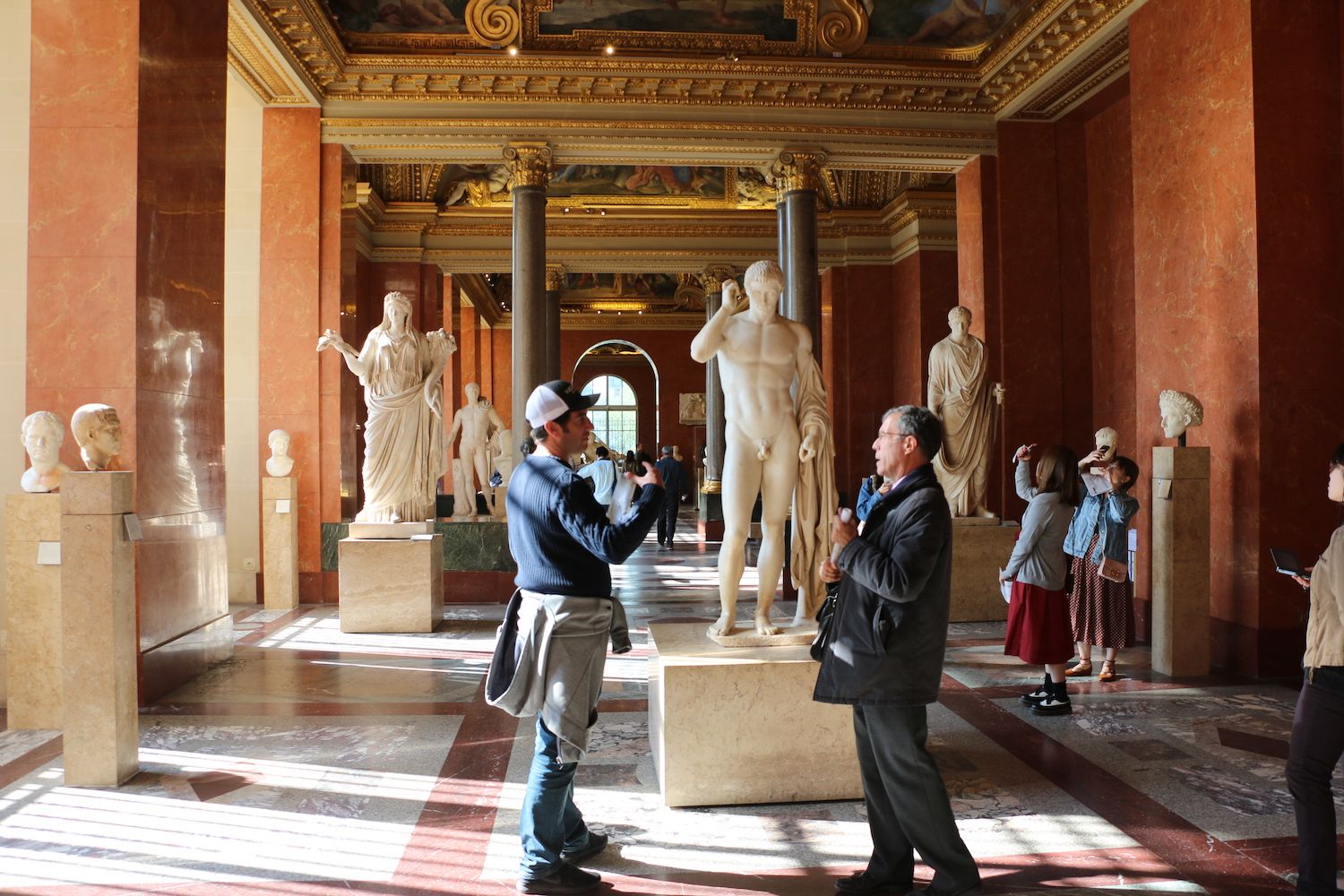 Napoleon’s victories expanded France’s collection and he resumed renovation.  When a country lost a war, they had to pay a great sum of money and when money was short, they paid with art.

The 12 years Napoleon ruled France was the quintessence of the Louvre, featuring the greatest paintings and sculptures of the known world.  A lover of art, Napoleon even hung the Mona Lisa in his bedroom, situated at the Palais Tuileries, which has today been converted as part of the Louvre.

David’s The Coronation of Napoleon is a jaw-dropping painting that hyperbolizes Napoleon’s triumph.  For instance, Napoleon’s mother was not at his coronation but can be seen in the painting.

This incredible piece foreshadows today’s media propaganda.  After Napoleon’s reign, most of the art accumulated through war were returned to their countries, and the “Musée Napoléon” was once again called “The Louvre.”

The Statue of Tiber, taken from the Vatican, is one of the pieces from his reign that remains in the Louvre today.

During the calmer portions of the 19th century, The Louvre continued to acquire masterpieces.  The stunning Raft of Medusa was purchased from Géricault’s heirs after his death. Watteau’s Jupiter and Antiope was donated by physician/ art collector Louis LaCaze in his will. 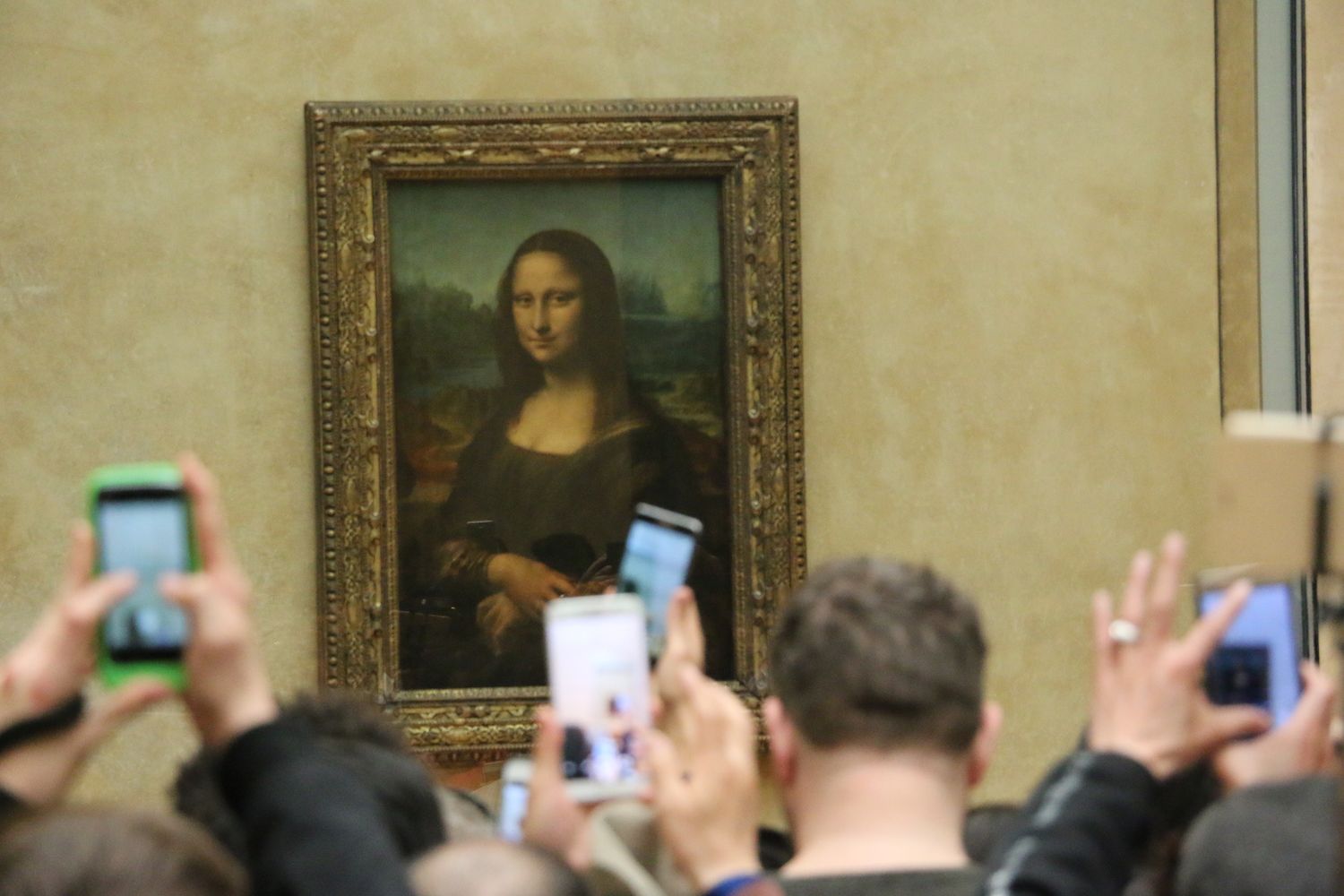 In the 1980s, President François Mitterrand was determined to renovate the Louvre. He commissioned architect Ieoh Ming Pei for a modernization project, leading to the iconic glass pyramid structure that acts as the iconic and globally recognized entrance of the Louvre Museum

Construction of the pyramid began with designs in 1984 and was completed in 1989.  The result was a 71 foot tall glass pyramid that is contructed entirely in glass using metal polls to support the panels. The base of the pyramid consists of 4 e

The Mona Lisa became widely known in 1911 when the painting was stolen.  In 1962, the painting was insured for $100 million. Daily, there are over 15,000 visitors that come to the Louvre just to see her.

She has been the subject of strange transgressions, including an acid attack.  Even after she was encased in bulletproof glass, attackers reared their ugly head.

One threw a bowl purchased at the gift shop against the glass, shattering the bowl, failing to damage the arguably most popular painting in history.

As the French consider art more important than just about anything, it can be said that the Louvre continues to protect France today just as it did when the structure was a fortress. 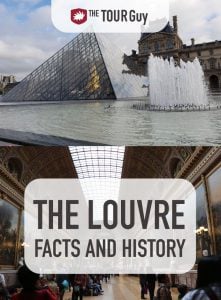