When planning a trip to Southern Italy, Pompeii is bound to be on the itinerary. This is mainly due to how well-preserved the ruins are. In 79 A.D. Mt. Vesuvius erupted leaving the city basically frozen in time. Some of Pompeii’s best and coolest things to see are the lesser-known ruins located just outside of the main archaeological park. And due to their obscurity, most visitors don’t reach them.

One such site is the Villa of Mysteries. In this guide, we’ll walk you through what this mysterious site really is and how to see it.

What is Pompeii’s Villa of Mysteries?

The Villa of Mysteries or Villa dei Misteri dates back to the 2nd century B.C., when it may have been built. It was a modest house of a rich Roman citizen. By 70-80 B.C., it had grown into such a grand structure that it was even thought to have been the house of Livia, the wife of Emperor Octavius Augustus. It takes its name from flamboyant frescoes that cover the wall of its main room, depicting the Dionysian Mysteries.

Like the rest of Pompeii, the villa was buried in the eruption of Mount Vesuvius in 79 A.D. Hidden until excavations began on the property in 1909. It is still shockingly well-preserved. This mostly due to the frescoes being buried for thousands of years under layers of volcanic ash. We recommend you take the journey to see them. Once you do, you’ll find it hard to believe that they are 2000 years old. They are truly one of the best things to see in Pompeii.

How can I see the Villa of Mysteries?

The good news is that the villa is included in the price of the entrance ticket into the main Pompeii area, and is located a walking distance from the Herculaneum Gate. The bad news is that it’s a fairly long walk from the main park, and is easy to miss!

How to Get Tickets: Claim your tickets on-site. Be careful though, lines can get pretty long, especially during the summer.

Taking advantage of a guided tour is a great way to make sure you get to see the Villa of Mysteries without spending precious time getting lost on the uneven Pompeii roads. On our Skip the Line Pompeii Ruins Tour with Villa of Mysteries, you will not only avoid the long queues to enter the archaeological site, but also have a fun and engaging guide lead you around the complex.

What Do the Frescoes Mean?

The famous frescoes are located in the Hall of Mysteries, a room in the residential part of the building facing the sea. The name comes from the frescoes’ depiction of the Dionysian Mysteries, a cult ritual of ancient Greece and Rome that used music, dance and potentially drugs or alcohol to remove inhibition and return the individual to a natural state.

A large continuous fresco covers three of the walls, intended to be read as a single narrative. On a vivid red background, the first fresco depicts a woman ready for some kind of initiation. This is presumed to be a Dionysian cult rite, and the second fresco shows a priestess preparing to take part. In the third fresco, the girl is seen participating in the ritual, before disappearing and coming back entirely changed.

She returns with a hat on and holding a staff, signifying a successful initiation or perhaps a completed ceremony of rebirth. Dionysus himself appears on the central wall with his wife, Ariadne, and female figures as well as fauns, and winged figures are seen on the side walls. 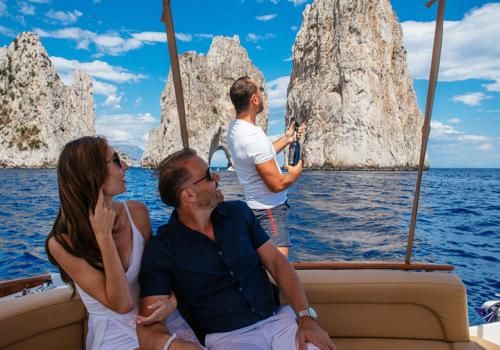 Want a great experience in Pompeii or the Amalfi Coast?