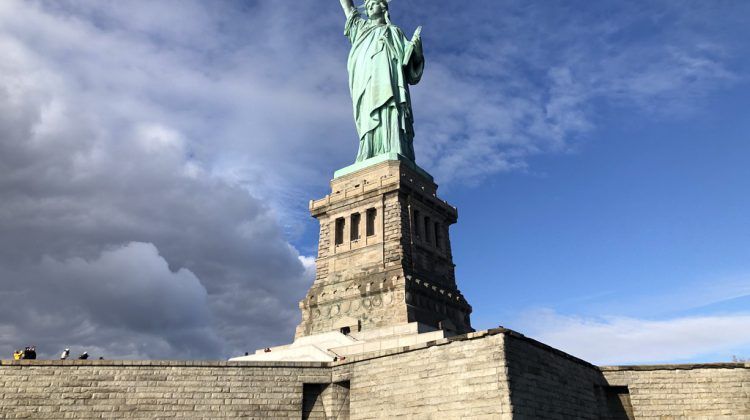 “Give me your tired, your poor, Your huddled masses yearning to breathe free, The wretched refuse of your teeming shore, Send these, the homeless, tempest-tost to me, I lift my lamp beside the golden door!”

These words from Emma Lazarus’s famous 1883 sonnet can be found at the plaque at the base of the Statue of Liberty. Lady Liberty is one of the United States’ most prominent attractions, standing as a symbol of freedom and democracy. She draws in an astonishing 3.5 million visitors per year, and we can understand why! Want to learn more about the statue and its significance? You’re at the right place then, keep reading.

The New York City skyline would not be complete without the iconic Statue of Liberty elevated along the horizon, welcoming the masses of people that travel throughout the city.  Do you ever wonder how it got there and whose genius was behind its creation?

Frédéric-Auguste Bartholdi was the man that made it happen.  Bartholdi was a famous French sculptor, most known for his work on the Statue of Liberty. He was elected by  Edouard de Laboulaye as the sculptor to build a monument that could commemorate the kinship between France and the United States as well as the appreciation for President Abraham Lincoln’s work. Bartholdi previously worked with Laboulaye in the designing of his bust and was excited to work on the project that came to life over the span of a few years. Thus, the Statue of Liberty was born.

How It Was Built and Brought to the U.S

The construction of the statue began in France in 1876. Bartholdi enlisted a number of French craftsmen to help in the process of transforming his unique ideas to reality. The various parts of the statue were created separately and were shipped to the United States for assembly in 1885. Upon visiting New York City, Bartholdi chose Liberty Island as its home because of the high level of visibility, which he described as the “gateway to America”. Most of us can agree that the location was the perfect choice, not only is the statue a signature attraction of the city, it’s a symbol of America and its core ideals.

Once the statue arrived, assembly began very quickly along with the construction of the pedestal upon which it still stands tall on today. The process was officially completed in 1886 and celebrated with a large dedication ceremony that was held shortly after. Around a million New Yorkers came out to revel in the unveiling of the statue, a part of a grand history that was yet to fully unfold.

What does the Statue of Liberty represent? The answer may seem glaringly obvious, of course it represents liberty but the meaning of this has changed for different people over time.

As earlier mentioned, The Statue of Liberty was created as the outcome of Edouard de Laboulaye’s idea for a monument to be gifted to the United States, serving as a symbol of their friendly alliance and appreciation. It also commemorated the centennial of the Declaration of Independence, a momentous event in history.

During the time of its creation liberty was considered as a controversial term by many around the world.  It was thought to be suggestive of violence, however Laboulaye and Bartholdi envisioned the statue as being a guiding light towards the peaceful accomplishment of a society that could embody those important qualities for the world. The name, “Liberty Enlightening the World” is a powerful expression of that intent.

For many, the Statue became the symbol for their introduction to the United States. Passing through the nearby Ellis Island Immigration Center, millions of immigrants marveled at the sight of the Statue of Liberty and promise of freedom it represented. It stood as a powerful reflection of the hope and promise of a better life offered in a new country rooted in the concept of liberty – the freedom to exercise one’s identity without penalty.

“To see that beautiful lady, lifting high her beacon of liberty, few had language to describe the feeling…our tears were our only words.”  – Isabel Belarsky, 1930

Those who saw Lady Liberty on their entry to the US would hold that memory with them for the rest of their lives. They came with nothing but a dream of a better life. It was what they had earned by crossing an ocean, ready to earn their place in a country that welcomed them with open arms.

Large numbers of people still emigrate to the United States and rally on issues that they are passionate about, so this rich history and its sentimentality is as relevant as it was hundreds of years ago.

And, now you know why the Statue of Liberty is such an essential destination while travelling around the United States, especially if the bustling city of New York is already a part of your plan (which it should be). Not only is it a beautiful sight to take in, the history and symbolic meaning of the monument is still very alive today, making for an undeniably enriching experience.

If you’d like to see the Statue of Liberty, along with many of the other great sights that the Big Apple has to offer, check out our NYC tours!