Guide to Main Churches in Rome

Rome has more than 900 churches all over the city and, with this high number, it appears to be the city with the largest amounts of cathedrals in the world. Certainly, while planning a trip to Rome, you can’t think to visit all of them and see other iconic sites, too. This choice could be hard as all of these landmarks come from different ages and still fiercely display all of their beauty. Thanks to this guide though, you might be able to find the best churches in Rome that you cannot miss!


While the information we provide in this post is free, we also sell tours at reasonable prices. Are you visiting Rome? Let us make your visit to the Eternal City an unforgettable one. We offer highly-acclaimed Rome tours, including our super exclusive Vatican Gold Tour and our Rome in a Day tour. Enter the Vatican Museums an hour and a half before the general public, witness Michelangelo’s Sistine Chapel at its most serene. And of course, see the Vatican with a local, English-speaking guide. 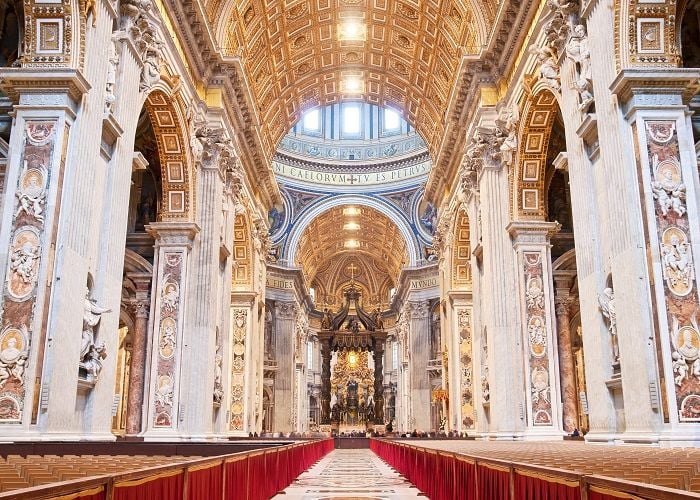 According to tradition, this landmark stands above the soil where Saint Peter was buried. Thanks to the first Christian emperor, Costantino, the works to erect this cathedral started in 318 A.D. After many years though, the project was not over yet. In 1506, Pope Julius II decided to start the project over and asked the famous artist and architect, Bramante, to develop a new idea. After more than one century, in 1626, the Saint Peter Cathedral was finally consecrated.

The façade that we admire today was completed by Carlo Maderno in 1614. The artist followed the initial project developed by Bramante and then perfected by Michelangelo. The statues on top display all the Apostles, except for Saint Peter.

The initial plan for the dome belongs to Bramante, even though what we see today is the final version developed by Michelangelo. The artist decided to remove some of the initial parts included by Bramante in order to create a more stable structure. The main square in front of the cathedral, instead, was created by Bernini who had to destroy some of the already existing buildings around Saint Peter to complete his project. The oval shape of the square represents the idea of the universe while all the columns around represent the power of the Catholic Church who protects its community. To learn more in-depth about this church, read St. Peter’s Basilica: Facts and History.


The Basilica of Saint Sabina

Built above Saint Sabina’s tomb and an ancient pagan temple, this cathedral was erected between 422 and 432. During the 17th century, some renovations made by artists such as Borromini and Fontana altered the initial decorations and a part of the former structure.

One of the entrances still showcases a wonderful porch, made with ancient columns coming from the Roman period. On the other side, where the main entrance stands, some ancient relics are displayed. Among these relics, it’s essential to mention the stunning wood door, finely decorated during the 5th century to showcase some scenes from the Old and New Testaments. On the inside, the roof is sustained by a wonderful collection of Corinthian columns that represent the connection with the paleochristian world. The main mosaic initially displayed above the altar, got lost and replaced in 1560 with a fresco, a painting done rapidly in watercolor on wet plaster, by Taddeo Zuccari.

Built between 1518 and 1586, this cathedral was created for all the French people living in Rome and it’s located in the heart of the city, close to the Pantheon and Piazza Navona.

The whole structure, from the outside to the inside, is decorated with a classic baroque style with materials such as gold and marble that dominate all over the structure. All the works of art inside the cathedral display French Saints or kings (such as Charlemagne) in order to glorify the country.

The Basilica of St. Mary of the Angels and the Martyrs

In 1564, Pope Pius IV decided to entrust Michelangelo with the renovation of an ancient Roman thermal bath site in order to build a cathedral. Michelangelo, still busy with the Sistine Chapel, decided to accept the project and developed the renovated image of the Roman site, called Santa Maria degli Angeli e dei Martiri Cathedral.

The artist showed a completely new attitude towards the ancient Roman site. Instead of destroying the former thermal bath area, as people used to do at the time, he decided to maintain the main structure, adding some walls on the inside to define the different areas of the upcoming cathedral. The result was a church with an architectural structure never seen before, more expanded on the lateral sides than lengthwise. During the 18th century, the artist Luigi Vanvitelli was entrusted with the decoration of the inside structures. Initially, Michelangelo chose not to decorate the walls and to leave everything original. Vanvitelli, instead, added some frescos and other elements, such as columns, which visitors still admire today.

Located in the iconic Trastevere neighborhood, more specifically in Sant’Eustachio, this church is an architectural masterpiece. The artist entrusted with the work, Francesco Borromini, encountered some initial difficulties to develop this project. Ultimately, the artist was able to produce this masterpiece, a cathedral which is still today a symbol of architectural freedom.

Borromini worked to create several geometrical shapes all around the cathedral. He chose to use triangles as the main geometrical shape in order to create complexity. The final effect is an open space, gifted with order and symmetrical areas. By using triangles, Borromini wanted not only to create a new geometrical perspective in architectonical spaces but also, he wanted to remind to the spectator the importance of Trinity, a symbol widely used in the Catholic Church. He also included bees, the Vatican symbol, and the Barberini family’s emblem, in the geometric structure.

Rome jealously preserves all the churches in the city. All of them are an evident trace of the time passing, proof from different ages and a constant inspiration for many. Their beauty and perfection remain solid throughout the centuries and still astonish people every day.

The Life and Architecture of Gaudí in Barcelona

The Louvre Museum: Facts and History