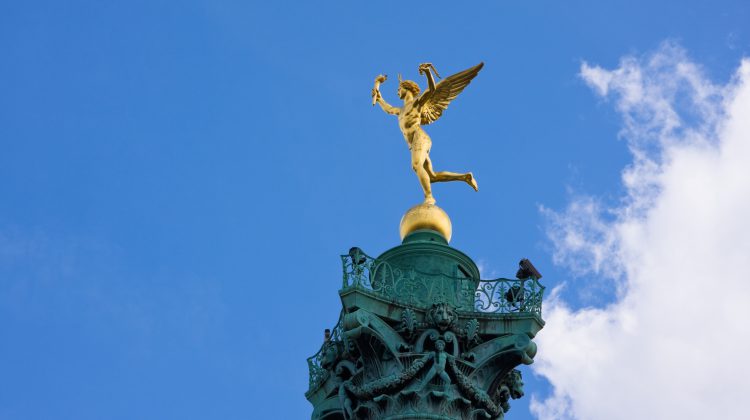 Few buildings were as synonymous with tyranny and inequality as The Bastille.

Imagine that you could be thrown into a horrible prison without any due process and basically be forgotten about?

How did the Bastille come to be so despised and what led to its eventual downfall?

Coming to Paris? Experience one our tours of the city of light.

Not coming to Paris anytime soon, but still have wanderlust and want to explore its beauty? Experience our awesome, virtual tours of the city from the comfort of your home.

During the Hundred year’s war with England, King John II was imprisoned in England after the French  defeat at Poitiers in 1356.

At this point there was an extreme need for a stronghold to protect Paris from invasion.  Etienne Marcel took up the task to begin this, but was executed as a traitor for trying to install a different king.

Foundations were built up and torn down on and off for several more years, but construction of this stronghold began in earnest in 1370 and was completed in 1382. Known as the Bastille, the massive building had four meter wide walls and eight 22m (72ft) high towers.

The Fortress of Paris

The Bastille was strategically vital during this period, both because of its role as a royal fortress and safe-haven inside the capitol, and because it controlled a critical route in and out of Paris.

In 1418, for example, the future Charles VII took refuge in the Bastille during the Burgundian-led “Massacre of the Armagnacs” in Paris, before successfully fleeing the city through the Porte Saint-Antoine.

The Bastille was occasionally used to hold prisoners, including the man in charge of the city’s defenses, Hugues Aubriot, who was the first person to be imprisoned there.

In 1417, in addition to being a royal fortress, it formally became a state prison.

The imprisoned population surged during the early 17th century, largely due to the influence of Cardinal Richelieu.

He was one of the most powerful religious and political figures in the kingdom, with a direct ear to the king himself. As such, he used the prison to fulfill his political machinations for power.

Most of the prisoners were enemies of the king, sent to prison by a simple order under the king’s seal.

Some of the most famous inmates were leading French idealogue and philosopher Voltaire, Fouquet and Sade.

The prison would become a symbol for the arbitrary judgement and arbitrary rule of a faceless elite, held to little or no accountability.

By July 1789, it was clear that people were fed up with the high taxes and famine like conditions set by Louis XVI.

Inspired as well by the revolution in the former British colony of America, the French people were stirred to revolution against the monarchy and aristocracy.

Led by such firebrands as Robespierre, and inspired by Enlightenment ideas like Republicanism and the “consent of the governed”, they formed the National Assembly and demanded a constitution that would limit the power of the king.

They wanted a government that would represent them, instead of treating them as expendable.

Storming of the Bastille

After the king attempted to shut down the National Assembly, the people of Paris were riled up to riot.

The mobs soon had the support of some of the French Guard, who were armed and trained soldiers.

They needed weapons, however, if they were to stand up against the might of the French army. And they knew just where to get them.

They stormed the Bastille, capturing the weapons and ammunition, and freeing the prisoners that were kept inside.

Ferit Onger, an authorized tour guide in Paris, explains the capture of the Bastille in the following way,

The Bastille, one of the strongest fortresses in France, was dismantled  in a matter of days. The head of the guards didn’t want to release neither the prisoners nor the ammunition to the people and was subsequently beheaded with a pen knife. The stone of the Bastille, was  used to build a bridge between the guillotine in Concord square and the parliament, as a symbol of people stepping over it while voting for their freedom.

It was seen as a victory for the French people over the authority of an aged monarchy.

It was a high watermark for the Revolution, which would be followed by bloody reprisals and a historic jockeying for power that would eventually place a new monarchy in place, under the rule of Napoleon Bonaparte.

Its impact was so iconic, today it is a national holiday in France which is celebrated every July 14th.